I run the following command:

...and the CLI outputs the following:

I see the following line in the sfdx.log file (log level was set to 'trace'):

I don't know what the IotPsl-1.uld.xml file is or why the error is an EXTERNAL_OBJECT_EXCEPTION.

Any information on what this error means or how to resolve it would be helpful.

I removed the permission set folder from the metadata directory, ran the mdapi:deploy command, and the operation succeeded. This was an educated guess based on the "Known Limitations" docs, which mentions that an "Unknown" error will be thrown when running the force:source:push command after removing a permission set locally.

While I did not remove the permission set locally, nor did I have a problem with the force:source:push command I guessed that the issues might be related to permission sets.

Any information on what might be the root cause of the problem or if this is a DX bug would be helpful.

I verified that I cannot create or modify any further permission sets via the metadata api and through the UI. The permission set screen in SF displays the following message: 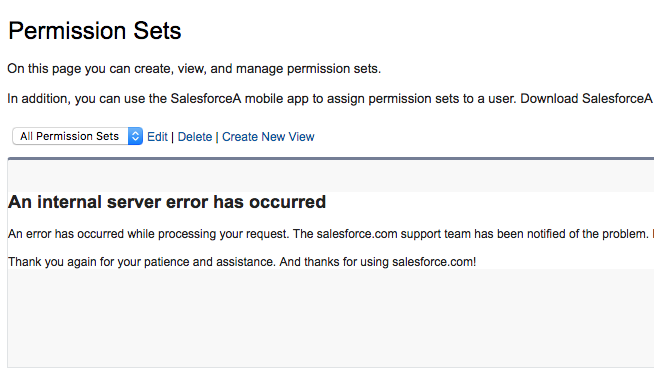 Not the answer you're looking for? Browse other questions tagged metadata-api salesforcedx salesforcedx-cli or ask your own question.

10
Managing presence of <objectPermission> tags in profiles
11
How is Permission Set Metadata Deployment changing in Summer '17 (API 40.0)?
0
Error on starting Salesforce DX project
2
“Metadata Through Metadata API Functions” permission Not Working
2
How to install a managed package with permission set licenses into a scratch org?