Why Lightning Experience is freezing (crash, hang, become unresponsive) after reload via F5?

While I'm developing Lightning Components I usually have this workflow:

This is my usual development cycle.

But also when I'm working in LEX as user, I very often use F5 to reload everything. This I do unrelated from development, just to ensure that I see the most recent data.

Starting with Winter 18 I noticed a very odd behavior in at least two different flavors:

Every second time I reload LEX via F5, it get stuck. It's freezing completely and the page becomes unresponsive.

Just using LEX (while development or just as normal user) and refreshing with F5 from time to time randomly the same freezing is happening.

In both cases a+b: there is only the release icon visible at that time: 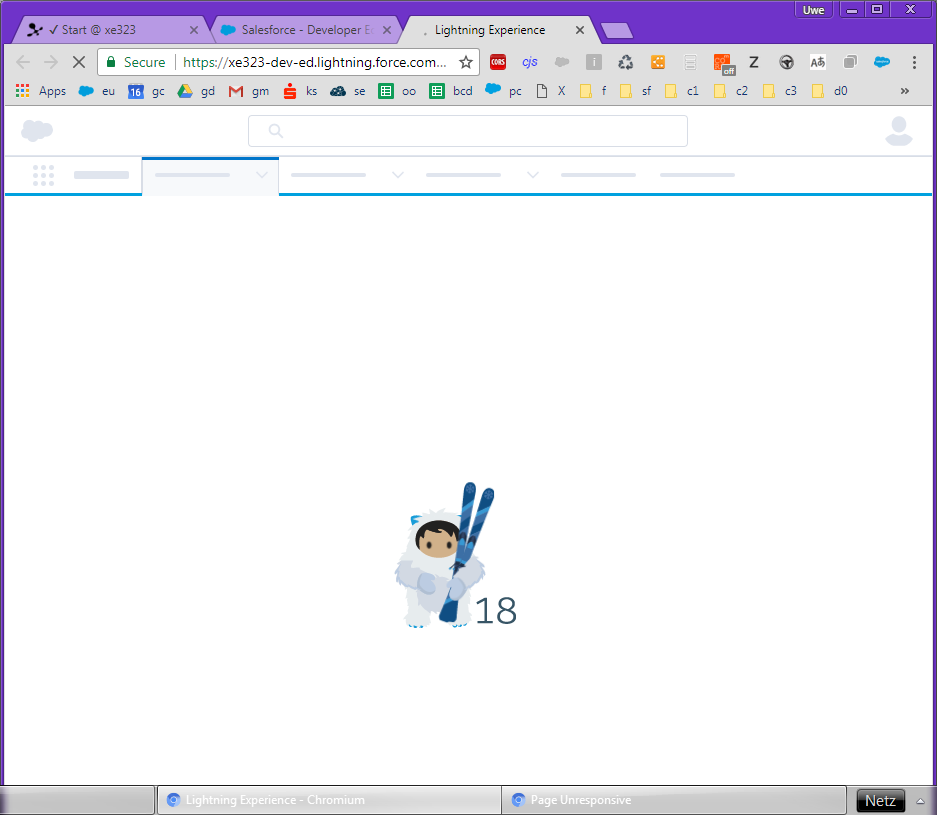 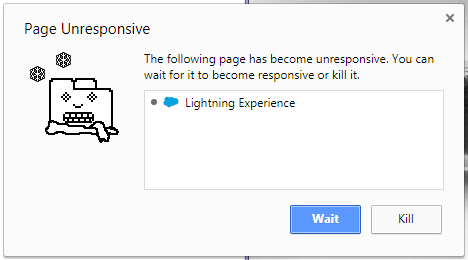 With Summer 17 this never happened. I cleared the browser cache, uninstalled all browser extensions, installed even different versions of Chrome, but none of this helped.

What is going on here?

At the network tab the freezing happen very early while loading one.app 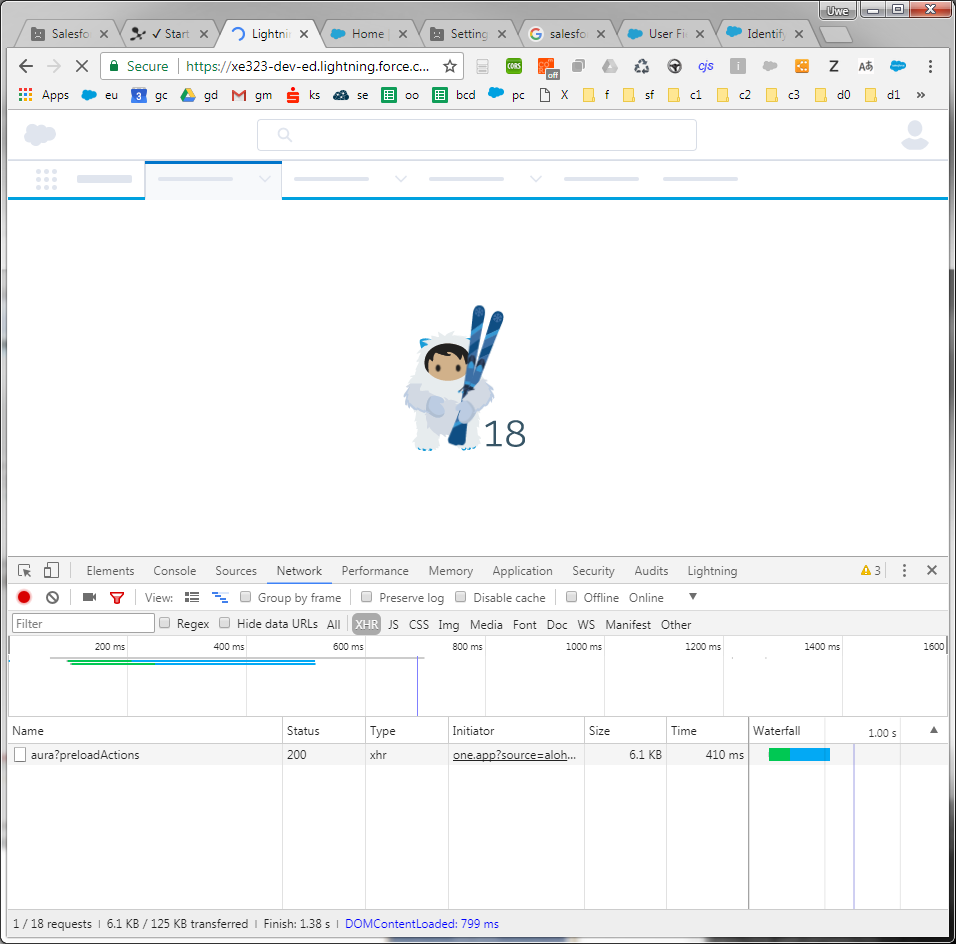 At least for scenario a) described above I found the reason - see it in the answer below. But this is not all: still b) is happening from time to time but it is rare enough to prevent me for debugging it to nail it down.

Also my colleagues and others here are reporting similar effects. It is happening irregularly. And it's happening on standard pages without any custom components, too. So in my opinion there is a serious bug in W18. Possibly multiple things can cause that - but it's nearly impossible for us to investigate that deeper.

Please feel free to add your scenarios (in the question, in comments or as answers if you solved such freezings).

Just received this mail from Salesforce, seems to be fixed in all instances:

We are pleased to notify you that the following Known Issue has been resolved: Chrome 60 and above crashes when "Enable secure and persistent browser caching to improve performance" is unchecked in Session Settings on Winter '18. Thank you for being patient while we worked to address this issue. Please feel free to reach out to Customer Support if you have further questions. Sincerely, Salesforce Success Team

And I can confirm, that I can't reproduce it anymore. Not with the Home page and not with a custom Component page.

I turned out that the reason was the way how I was starting LEX...

Because I like to use Aloha (Salesforce Classic) and LEX at the same time, I never used the Menu "My Name" > Switch to Lightning Experience. There are lots of reasons to work in both works in parallel. My way to start LEX was to simply use a link pointing to /one/one.app

What I had then, was kind of a hybrid state: on user level I was still an Aloha user. I just run LEX by link. Now I had several Aloha-tabs running side-by-side with several LEX-tabs. I liked that very much. A REAL switch to LEX causes unwanted jumps of some my opened Aloha-tabs to reload in LEX.

I don't now the exact reasons why, but the crash and freezing does not happen, if I use the standard switch mechanism. I don't like it, but for now that "normal" way to switch the different themes is my "workaround".

Also I have tried to change my link to /one/one.app?source=aloha#/home, but this seems not to help. For now it looks like we really need to be Lightning Users to avoid the freezing. For what I've observed, this behavior is very good to reproduce.

I would highly appreciate it if Salesforce could allow us to use just two different URLs to access and switch between the two experiences dynamically and (more importantly!) to use them in parallel peacefully coexisting in tabs like it worked fine until Winter 18.

As said above there is also at least scenario b) and this is not the only reason for such freezings. If you have similar experiences, let's collect them here. This caused my a lot of headache and I'm sure a list of things to check will help others.

We have had this issue in Chrome for some of our developers. Salesforce has told us that this is an issue with Chrome specifically and the fix for us was to enable caching via Session Settings in Setup: 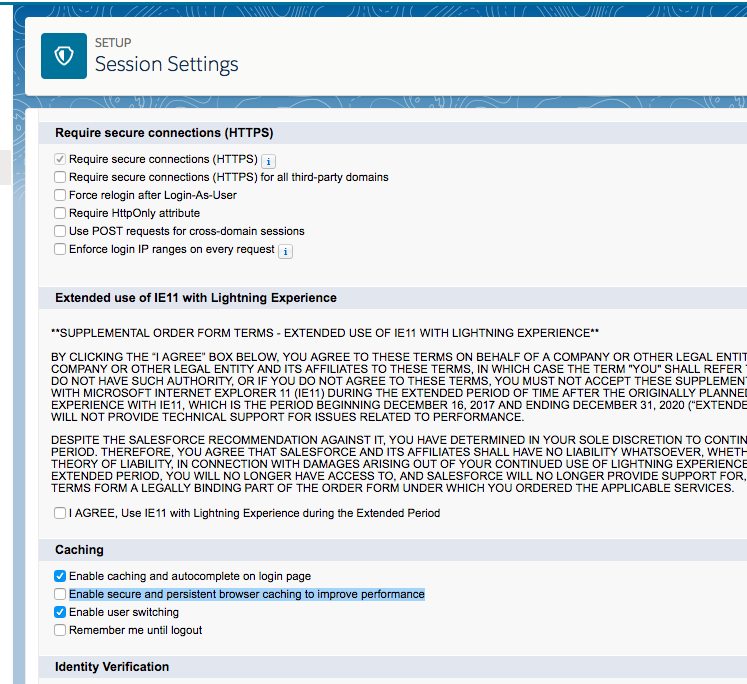 We previously had this disabled as it was caching our components and causing problems in development, but these issues seem to be resolved now.

Any Scenario: use Chrome <= v59.0 or Mozilla Firefox

Now Known Issue has been created by Salesforce confirming the situation: https://success.salesforce.com/issues_view?id=a1p3A000000mCfPQAU

As stated there this issue is caused by LEX with Chrome v60.0+.

I can confirm, that using Chrome v59.0 (or v57.0) now for a couple of hours not one of these freezing occurred. Also from my colleagues using Firefox I got the indication, that none of such freezing are happening.

I found that it was one of my apex controller methods.

It was getting hung up on one of its queries and that would cause the page to crash. I had 'WHERE Id = :var' and var was blank or null it caused this hanging problem. I would open up the network tab in chrome console to check if any apex controller methods are hanging.

When I put an if-statement to only query if var is not null, it does not hang anymore.

Not the answer you're looking for? Browse other questions tagged lightning-aura-components lightning-experience or ask your own question.

14
Lightning Development in SF1 – How to prevent caching?

2
Is Javascript must to work on Lightning Components?
5
Lightning - Rerender child components in aura:iterable after parent attribute changed
10
Lightning Components: DOM-Functions behave different on new vs. existing record
3
Is it possible to invoke a function after sforce.one.editRecord(recordId) or $A.get('e.force:editRecord') has been saved?
2
Error: [LWC error]: Invalid url value “”. Expected a non-empty string
3
Visualforce doesn't reload in Lightning Experience