With Salesforce Canvas, is it possible to call custom web services from the app?

I've spent some time this week playing with Canvas. I've setup an example that uses OAuth to authenticate and authorise the app; it then retrieves a record, and makes an update to the record from the app. This is done with the REST API.

Initially, I checked the links property of the context, but it only lists the standard REST API endpoints. I then started to look for ways of calling custom web services. For ease, I started with a custom REST web service; it was not possible to call this even when using a c.instance.visual.force.com address, as that redirects to the standard instance.visual.force.com, and there's a access-control-allow-origin policy issue.

I thought for a moment about using events - creating an event in the app that's picked up in the page, which can then call logic in a controller. However, Canvas events seem to be geared at allowing cross-app communication, rather than app-to-host communication.

Am I missing something, or is Canvas currently just aimed at providing an easier entry point to the standard API options?

EDIT: Thanks to Andy for his quick response! He's correct in that you can craft a URL to point to the instance URL rather than a relative URL that's on the force.com domain. This would work from a server making a callout, and it does answer the original question; however, I'd be interested in other answers around making this work from within the app page (i.e. Javascript). Currently, the code in the accepted answer won't work as it does not allow calls to instance.salesforce.com from c.instance.visual.force.com.

In order to make Apex REST calls from your Chatter page via JavaScript you need to utilise the client proxy built into canvas. There is some more detail and examples of this here.

To call an Apex REST service you will need a URL that looks like this...

I've looked at the CanvasRequest (via in my case the Eclipse Java Debugger) and see this. 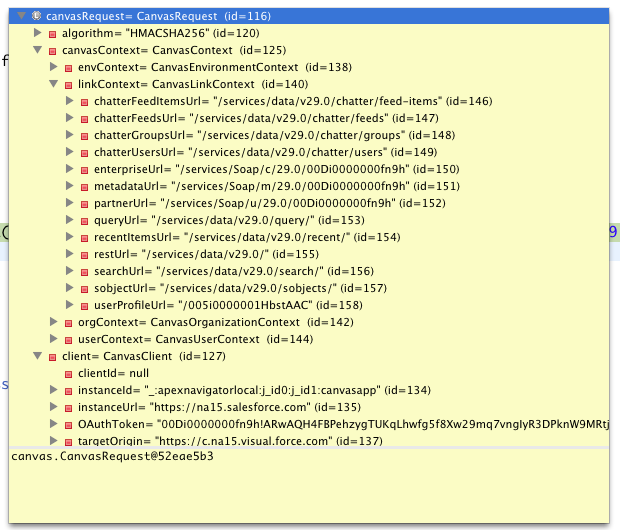 So in order to construct the correct URL to an Apex REST service and utilise the approach above via the proxy you would need to do something like this...

I would say that I've not had time to test the above, but from my reading of the docs above, my understanding of the CanvasRequest and the samples this should hopefully get you going!

Not the answer you're looking for? Browse other questions tagged canvas or ask your own question.