Visualforce: Why the display of an PDF-File inside an IFRAME works on a Sandbox but not in Production?

On a Visualforce page I have an IFRAME like this:

It starts up an shows nothing because src is blank. Good. To store the actual PDF I upload it as File (not the old Attachment). So technically I have a DocumentVersion which holds the blob of the pdf.

On the sandbox, it works like a charm: the pdf will be loaded inside the iframe as expected.

Now if I deploy the same code on Production, the following happens: the IFRAME is not updated, but the PDF is downloaded by the browser.

The code I use is 100% identical - but behaves differently !!

I found so far, that the code is NOT the reason for this. The difference is caused just by the link I use. This itself is behaving differently:

I could not track it down, but I expect some headers are set differently by Salesforce causing that result.

Does anyone know more about the backgrounds on that or has encountered similar effects?

I was able to dig deeper inside this issue inspecting the headers in detail as shown here: Files: Why ContentVersion /sfc/servlet.shepherd/document/download/ sometimes sets Content-Disposition=attachment and sometimes =inline

Basic issue is, that Content-Disposition needs to be inline but on production it gets attachment.

There is a specific settings in salesforce 'File Upload and Download Security' that can help you to choose download or show file. 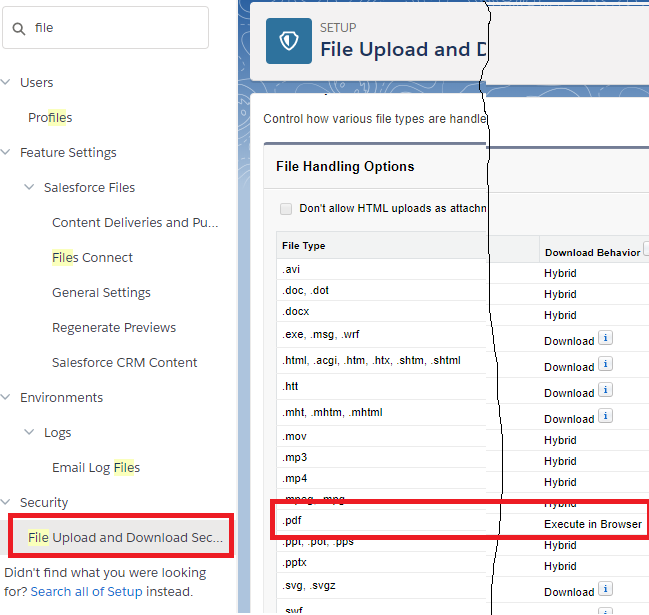 Not the answer you're looking for? Browse other questions tagged visualforce attachment contentversion files or ask your own question.

14
Display PDF with Visualforce
0
apex:relatedList pageSize works in sandbox, but not production
6
Files: Why ContentVersion /sfc/servlet.shepherd/document/download/ sometimes sets Content-Disposition=attachment and sometimes =inline
1
Visualforce parameter passing to controller in sandbox, but not production
3
Visualforce rendered as PDF not working in Production but works in Sandbox (using Lightning in both)
0
Access PDF File from the Files Tab