SAQL - When I dynamically create dates in SAQL and group them, I can't use the “Timeline” chart

I try to create a timeline chart for every year for products on the market that are started to sell before that year and ended to sell after that year.

To get my filtered data I filter them like I described above. Then I union my data from the different years.

All this works and I get the right data back. Also the grouping it self works, but when I try to use a timeline chart, it doesn't let me do it. 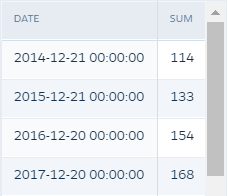 Every help is greatly appreciated. Thanks

I tried with SAQL a lot of different ways, but the only thing that worked was that I used Recipies and calculated for every row for every year, if it was on the market. Lets call them "IP_[YEAR]"

Here the SAQL to the resolution:

Maybe it will help somebody.

Not the answer you're looking for? Browse other questions tagged date einstein-analytics charts saql or ask your own question.