I am referring the source code from the link: Unable to upload the xlsx file using Apex and Visualforce, why? . How we can write the test classes for it ?

I have write the test class for below, it only covers 52%

Here is the code coverage: 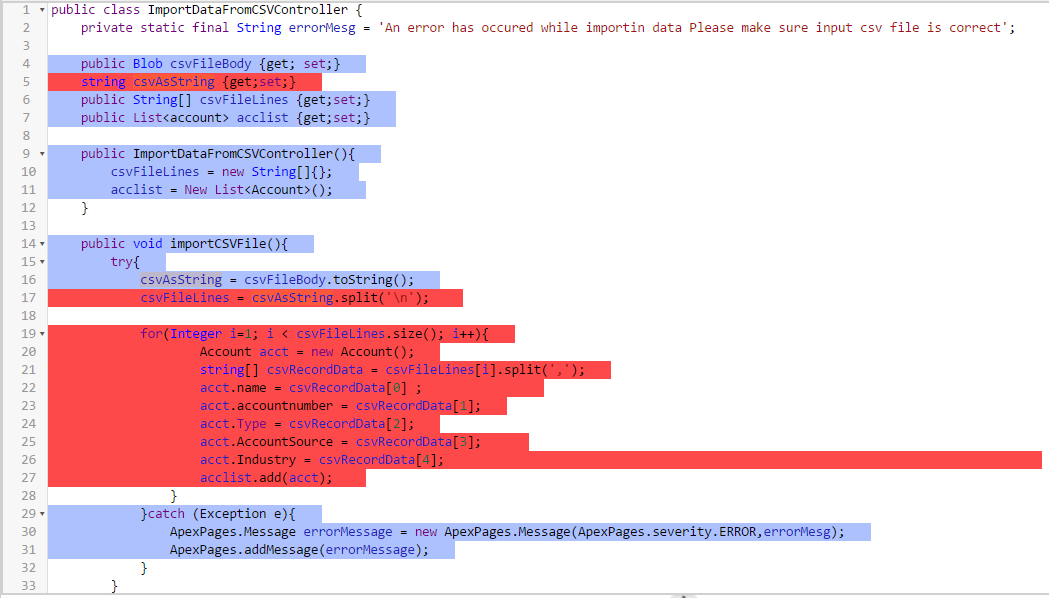 As I dont have option to add solution, hence adding solution as a part of the question only. 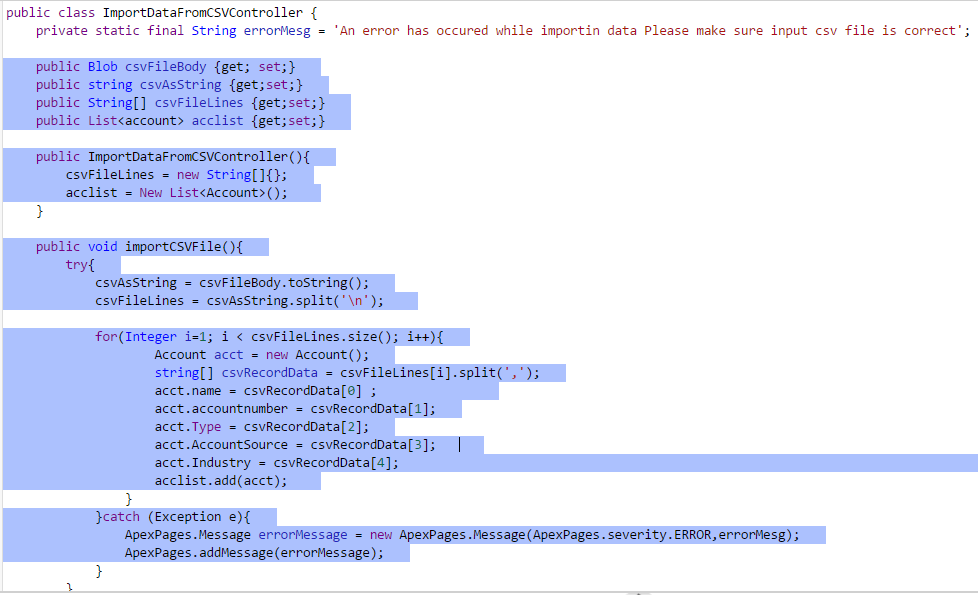 The question "How do I write a test for/get more coverage for X?" is a pretty common one, and has numerous variations.

The refrain that you'll read over and over is that code coverage is not the primary goal of unit testing, ensuring that your code produces expected output for different inputs is. If you test a sufficient number of possible inputs for each publicly accessible method, the code coverage will follow.

Why am I so confident? Because your current test method doesn't provide your class with a CSV file to parse. No CSV file means that csvAsString = csvFileBody.toString(); is probably giving you a NullPointerException that kicks you into your catch block. Even if that weren't the case, no CSV file means that csvFileLines.size() returns 0. 0 is less than 1, so you never execute the code inside of your loop.

No execution = no coverage.

Fixing this particular unit test of yours will mean that you need to, in your test method, create data to act as your test "CSV" file, and assign it to your csvFileBody member variable before calling importCSVFile(). You'll probably create this as a String, which doesn't match the Blob type of your member variable...but I'll leave tackling that problem to you.

The larger theme to realize here is that only code that is executed by a unit test is counted as "covered", and to execute a particular piece of code in a test you need to identify which conditions will lead to a piece of code being executed and ensure that you set up the appropriate data to create those conditions. In this case, the condition is "csvFileBody has at least 2 lines of CSV-formatted data in it"

Another realization that I hope you'll come to is that by fixing this one unit test, you'll lose some of the coverage that you used to have (assuming your test "CSV" data is properly formatted for the class you're testing, you'd lose coverage for the catch block).

The "fix" for that is to have more than one unit test that is specifically testing importCSVFile(). Having properly formatted data stored in csvFileBody before calling your method is an example of a "positive" test case. Your current test, which has no data stored in csvFileBody is a "negative" test case (i.e. your input is not what you would typically expect, and may cause issues with the class you're testing).

Testing multiple cases, both positive and negative, is a best practice.

The final thing I'll talk about here is making assertions.

Assertions are how you actually "test" your code, making sure that your output matches your expectations. If you don't make assertions, it is very difficult to ensure that your code is behaving the way you think it should be for all but the most simple code.

Someone could, in the future, change your code so that the result of 2 + 2 would be 5. Accidents that obvious don't really happen (or at least I hope they don't...), but more subtle accidents are virtually guaranteed in systems of nearly any complexity. Assertions are what shields you from such accidents.

For your negative case, a good thing to make an assertion against would be that the page messages contain the same error message as the one you defined in your private static final String errorMesg (you might want to add the @testVisible annotation to make it easier to grab the exact error message to assert against).

Not the answer you're looking for? Browse other questions tagged apex unit-test code-coverage or ask your own question.

20
How to write a unit-test / test class for trigger?
1
Unable to upload the xlsx file using Apex and Visualforce, why?