Need clarification on a getter

I have a custom visualforce page and controller extension that is working. There is one getter that I do not understand why it works. I was hoping someone could explain it to me. In the below code I do Public String merchantNumber{get;set;} and never give it a value. It is just an empty getter. And in my javascript I say sforce.console.openPrimaryTab(undefined, '/' + id, true, '{!merchantNumber}', 'Case On Tab');

The correct merchantNumber populates in the tabLabel when the page pops. How is this possible? Where is it getting the value from? It perplexes me because it is a variable I made up, it's not a custom field or object, and I don't define it. Any insight would be great!

I should also mention, when I take out the merchantNumber getter, the page breaks as expected. When I add a value to merchantNumber, it is not dynamic and retains one value for all merchant numbers 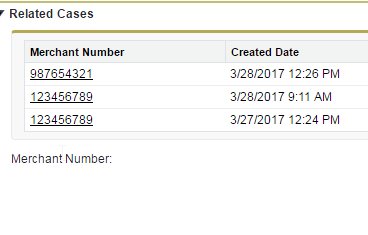 I do not think the getter/setter is actually doing anything for you.

This is the methods definition:

What you are calling:

Now merchant number is null (but really blank with how VF handles null values) for the label which is fine as it's an optional label.

Which looking at the documentation means that the default label for the record is called which is just the case number. (judging by the picture)

Just add this to your Viusalforce page to test if the getter setter is really doing anything.

I have a strong feeling its just null/blank

I just tested on my end with our Console app by running this JavaScript commands:

Not the answer you're looking for? Browse other questions tagged visualforce javascript controller-extension set getter or ask your own question.

4
How to pass the string value to Opportunity owner field from custom object's vf page?
0
Cross-tabular Report based on GROUP BY CUBE Result
1
How to pass a variable's value of child visualforce page to a variable in parent visualforce using js
1
Init field with setter and getter
8
Simple getter setter
2
Apex Repeat inside PageBlockTable Headers aren't Displayed
1
Custom visualforce lookup
0
Need help With getter in LWC