In my Communities Custom ThemeLayout, I have some areas of the layout that are hidden/off-screen (via CSS) and only visible during certain events. For example, I have a "slide-out menu" content area that appears on every page and is only visible (slides out) during mouse-over (:hover) of a small tab. This area can be used as a "toolbox" that can be used to contain whatever component the page designer sees fit. 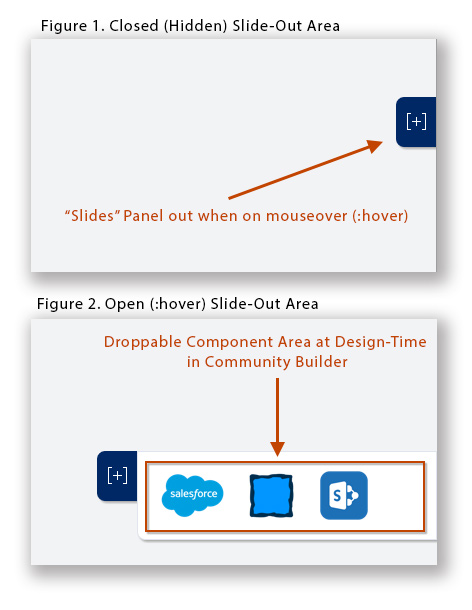 The functionality works well at run-time. The annoying part is when you're in Community Builder (design-time). If you want to replace the component contained within that region of the ThemeLayout, the area "slides" back when not hovered over and when you try to drop/place a component in that area, the region "slides closed".

If so, I can just create and apply a CSS rule to keep the hidden areas visible during design-time and work normally during run-time. (:hover events in Community Builder don't fire while you're dragging a component.)

[As a work-around for the moment, I've been commenting out the CSS rule(s) that hide the the areas in question, dropping in the components, then re-enabling the rule(s), but this requires code changes.]