I love to run my tests in the Dev Console with the Always Run Asynchronously checkbox enabled as it saves time.

On the other side during our automated Nightly Test run I would like to disable Parallel test runs as we otherwise have to many false positives with UNABLE_TO_LOCK_ROW errors. 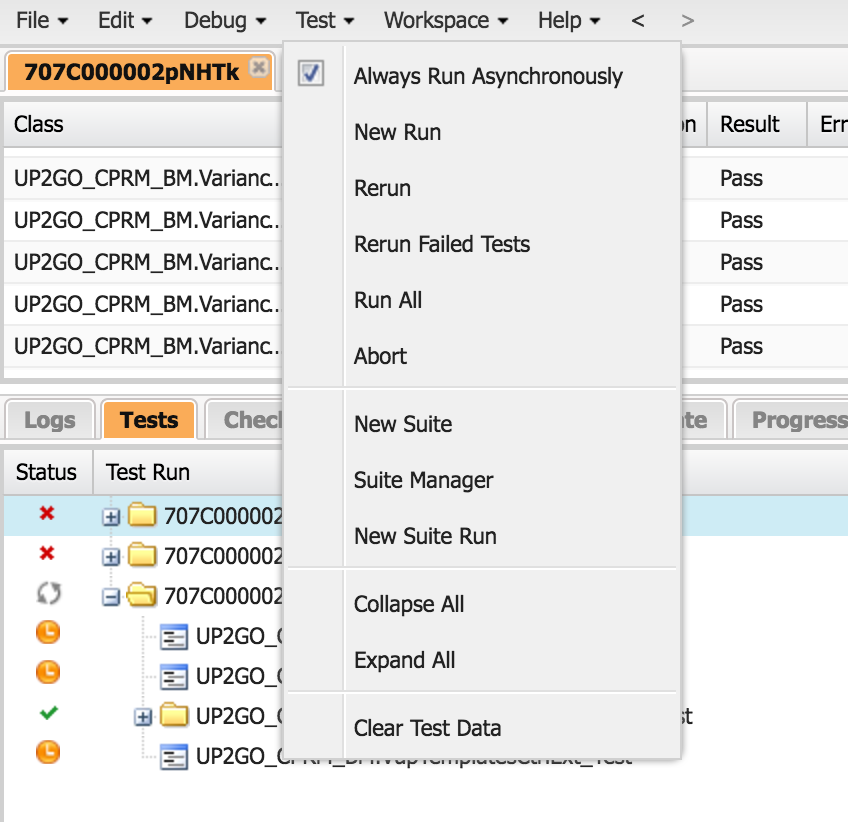 It seems I can't do both. As the screenshot indicates tests in the Dev Console run sequentially even with the async checkbox on.

I believe you're getting confused. Asynchronously has nothing to with parallelism. For the first box (Disable Parallel Testing), when checked, tests run one after another, and when unchecked, run several classes at a time.

The second box (Always Run Asynchronously) tells the Developer Console if it should run tests in the background or not. When checked, the test appears in the test panel and will be updated periodically as the test completes. When not checked, the "Run Test Synchronously" dialog will appear, blocking the IDE entirely until the test runs. You can observe the difference in behavior by running a test that is several seconds long with the box checked or not to see the difference.

As far as I know, there's no API to set if tests run in parallel or not, simply the Disable Parallel Testing checkbox in the UI. It is also explicitly overridden when running tests during deployment to production to avoid the UNABLE_TO_LOCK_ROW errors you've mentioned. The Developer Console will honor the Disable Parallel Testing checkbox regardless of the "Always Run Asynchronously" checkbox.

First, let me clear that the two things - Disable Parallel Testing and Always Run Asynchronously are completely different. Here is each one's explanation in my words,

Disable Parallel Testing checkbox if checked, mandates the platform to run each test class one after the other. So, we can say that this setting is test class specific. If checkbox is unchecked, the platform will run the test classes in parallel.

Always Run Asynchronously checkbox if checked, mandates the platform to run test methods in a single test class to run in parallel. If unchecked, the test methods will run one after the other.

Note there is no dependency of the earlier setting with the later setting.

Not the answer you're looking for? Browse other questions tagged unit-test developer-console locking asynchronous-testing or ask your own question.

3
Test already started: How to do big tests
14
What qualifies as running a test synchronously?
5
How to kill a unit test
3
Code Coverage reports 0% when 100% of the class is covered with tests
1
What are the exact differences between running a unit test in the developer console and in setup?
6
What information/context are shared between Apex tests running in parallel?