I'm trying to implement Duplicate Management in my Org Salesforce. Everything seems clear but one thing really bothering me. While creating a new duplicate Rule, in the Actions section, "Action on edit", seems not working. I assume that "Action on edit" is the action that performs on existing duplicate records.

To be more precise, I have two existing contact records in salesforce. Ethan hunt and other is also Ethan hunt. I have duplicate rule based on email. And those two contact records does have same email. Now I have activated my duplicate rule. whenever I edit one of those duplicate records, shouldn't I be notified or blocked. But it not happening with me. Please advise me if I missing something. 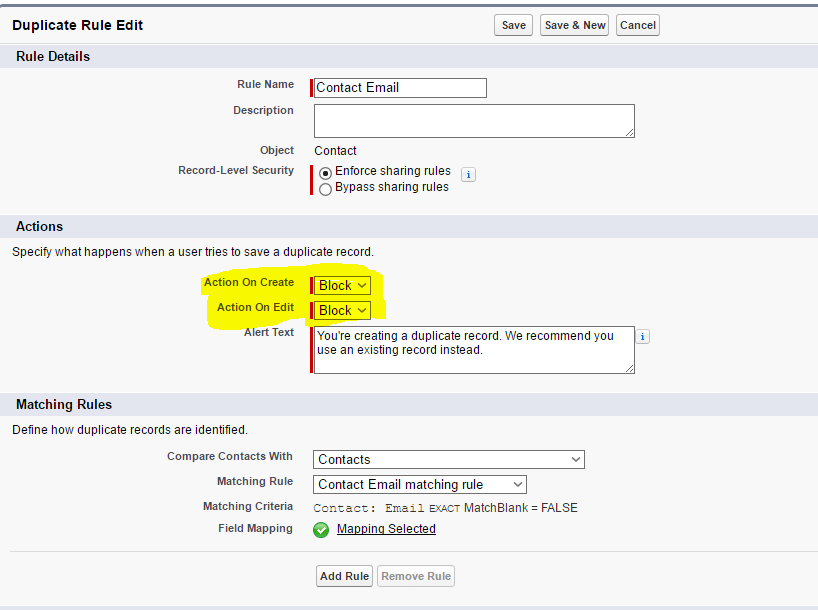 For users with Performance or Ultimate Edition, you can run Duplicate Jobs in Lightning Experience to place records that are duplicates before activation of the Duplicate Rules into DuplicateRecordSets

However, if you are like most customers on Enterprise or lesser editions, you need to do some work to coerce existing (i.e. last edited before the duplicate rules were activated):

What does work (but probably not useful in most cases)

That is, Duplicate Rule logic executes only when the fields used in the Matching Rule(s) actually change on the save process.

What does work (but will be a pain)

Not the answer you're looking for? Browse other questions tagged administration duplicate-management or ask your own question.