Stage conversion report for each and every Sales person

I want to create a report on Stage conversion percentage of opportunity per sales person. Like if a salesperson have 10 Opps in first stage and only 6 forward to second stage then from 6 only 4 forward to third stage, only one go to fourth stage. So I would like to calculate sales person stage conversion and see in which stage he is losing more opps so we can help him on that stage. 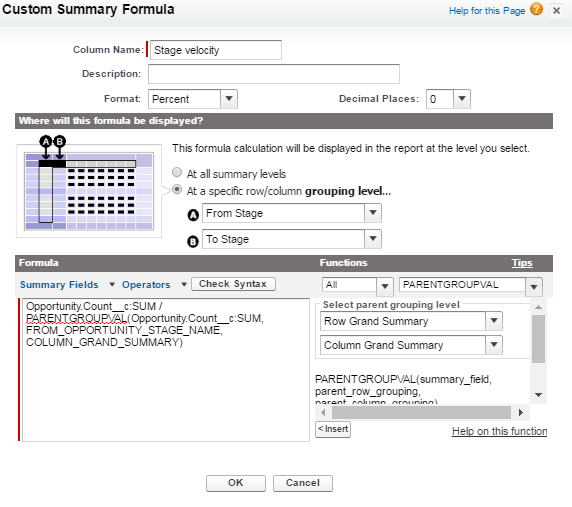 Please help me to get correct formula.

reporting formula opportunity-history
Share
Improve this question
asked May 8, 2016 at 12:20

You'll then see at which stage your users were having difficulty converting to the next stage. I've seen this report done in a number of different ways and this is just one variation. Some only look at comparing each stage to close-won.

It sticks in my mind that you may need to use (PrevValue - CurrentValue)/(PrevValue). Also, If you want them to sum to 100 percent, then you're barking up the wrong tree. You're looking at a totally different number or percentage here. If the last column of data is from your next to last stage to closed-won and you're comparing with it to having began for example, at prospecting (that column being zero since none convert from a previous value or 100% convert from zero depending on how you view it), you'd need to factor this into account. The last column before your grand total would be (closed-won - next to last stage)/(next to last stage).

The Grand Total would need to factor in the total opportunities converted to closed-won, probably by multiplying everything by (closed-won)/(Prospecting), assuming every Opportunity begins at Prospecting. I hope that makes sense. Otherwise, the final number can't be expected to total to 100% unless you somehow normalize your data. I've not run any numbers, but off-hand, I think that's the approach you'd need to take. If what you really want to know is which stage doesn't get converted, then a guage should tell you or any kind of a bar chart. You'll readily see the peak.

Let's see if we can create a simple example:

If you remove the 12 records in prospecting that account for 40% and don't include that in the total, you get numbers that look more like the following:

As you can see, with this type of report, the numbers just aren't inclined to come out to 100% for you. They also show you that you can manipulate numbers to show pretty much whatever you want them to show. Be careful of how you interpret reports.

Not the answer you're looking for? Browse other questions tagged reporting formula opportunity-history or ask your own question.

2
Report that groups same record on 2 date fields?
1
How can i get Opportunity stage conversion rate in report
0
Create report to get Stage conversion rate of opportunity
0
How can I create report on Stage velocity as per Sales user
1
How To Show Exact Decimal Value On Salesforce Dashboard Component?
0
PARENTGROUPVAL to calculate Amount Percentage in Reports
0
Issue with Lightning Dashboard formula