I was trying to compile a list of VisualForce components (but this could be any data really) and their attributes and put them in an Salesforce custom object.

I naively thought I would then make a component object and a attribute object and an junction object to join them. But I am having problems.

But when I try to upload the ID lists I get an error on the data type. Apparently it is looking for a reference and doesn't care that I have a number that does in fact match the name field of the other object.

So if you had a traditional many to many relationship using three tables in this manner, what is considered the best way to translate it to Salesforce?

Or if I wanted to plan such a thing from scratch and have it be designed towards the Salesforce platform what approach should I take?

Edit to clarify, below is a screen grab of three spreadsheets, each one would be the data that would go into traditional SQL tables.

This would be the quick way to set this up in SQL Server for instance, but for the reasons I mentioned above it does not seem to be very Salesforce friendly.

Your data model in Salesforce won't be any different than what you've currently got documented in the image in your question.

If you want to load data into this junction object structure, you're going to need the Salesforce id values of the Component__c and Attribute__c records to populate the lookup fields.

Or if you would rather use your own Id column value to populate the relationship, you would add a text field on Component__c and Attribute__c, marked as an External Id, and populate that field with the values you're showing in your images in the Id column. Then when you load data into the ComponentAttribute__c table you can choose to use the external id field on the parent objects as the identifier for the lookup field (rather than needing to know the Salesforce record id). 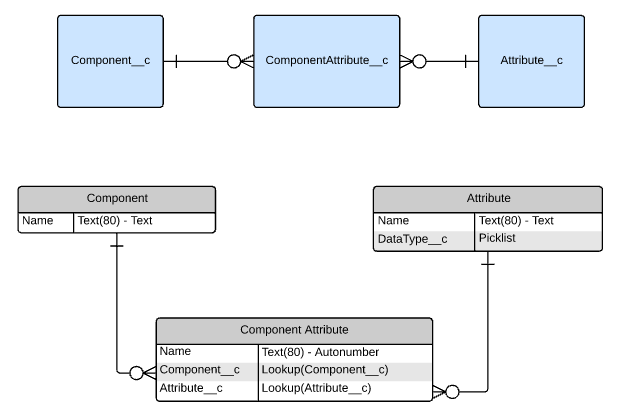 Not the answer you're looking for? Browse other questions tagged soql custom-object data junction-object or ask your own question.