When I am developing sometimes my eclipse hangs or takes 8 mins to push a change. IT really slows me down. It can take a long while to run tests.

I sometime run tests in the browser to speed things up.

What tips do you have to speed up development?

In lieu of using Eclipse, a much better option (IMHO), would be to use maven's mate with Sublime Text. Sublime Text has way better text editing features, and with maven's mate you get all the features of Eclipse.

A couple common reasons for a slow Eclipse Force.com plugin that you might take a look at.

1) You're working on a production system

In this case every save you make (with some exceptions) is performing a production deployment which means Salesforce runs all tests in the org. Instead of coding against production you'll want to use a sandbox to make your changes and then deploy to production once you've got things where you like it.

2) The Force.com plugin has a bad (IMHO) polling algorithm

The way a save in Eclipse (and all tools) is asynchronous. Meaning that one message is sent to Salesforce with the data, and then Eclipse polls back ever so often to see if Salesforce is done. The algorithm for this sucks and works by doubling the timeout. Meaning that after a couple polls the wait time before it checks again rapidly increases and you'll be waiting for a long time for something that is already done (see @surfous's answer for an example). You can see the number of polls in the progress section.

Personally, if the number of polls increase above 13, I cancel the save (by clicking the 'stop' icon) in the progress log and then re-save the resource after making a fake edit (i.e. add a character then delete it). The second save won't really be doing anything, but if you do get a failure it'll typically get it quicker the second time (as well as a success). To see the REAL time it takes to do your save login to the org and go to setup->deploy->monitor deployments and you can see if your stuff is in progress.

When files open in Eclipse something happens that involves a network communication. I believe it's loading all the orgs objects and fields to initialize the auto-complete. Sometimes that operation can be super slow and your stuck waiting for a while until your editor loads.

4) You don't have enough memory

Eclipse is hardly shy about consuming resources. If you have a computer with a small amount of RAM Eclipse is just going to be slow, period. If it starts running low on memory it gets REALLY slow. You can monitor heap usage in Eclipse to see how much you're using (instructions). You can also change the max amount of memory eclipse is allowed to use (instructions).

5) Your deployment actually is really slow

In some cases Salesforce just takes forever to process things. For one client I ran into situations where EVERY save to a VisualForce page took several minutes to save. We logged a case with support and a bug was filed, but as far as I can tell people still run into really crappy performance now and again. In these cases you should contacts support and let them know about the issue.

If you are using a Mac, I highly recommend this free open source alternative: https://github.com/joeferraro/MavensMate-SublimeText

They are making a Windows version soon as well.

Longer term, I think the new Tooling API will help will speed and performance...

Here are a couple tips, though it doesn't solve the overall problem.

One thing I've noticed in Eclipse (I'm on the mac - other Force.com IDE/Eclipse platforms may vary) is that a test run - even a single test run - can be terribly slow. If Eclipse has been running for "a while," I'll quit and restart it. Test runs return results much more quickly then.

Additionally, a deployment may be finished long before the results are returned/displayed by Eclipse. There have been times where I've had an active deployment going in eclipse, but I could check the class(es)/triggers/pages in the browser and see that my changes had already been successfully deployed. Since the deployment is all-or-nothing, I can safely assume that if I see any of my changes from the deployment, all of the changes have successfully been deployed. 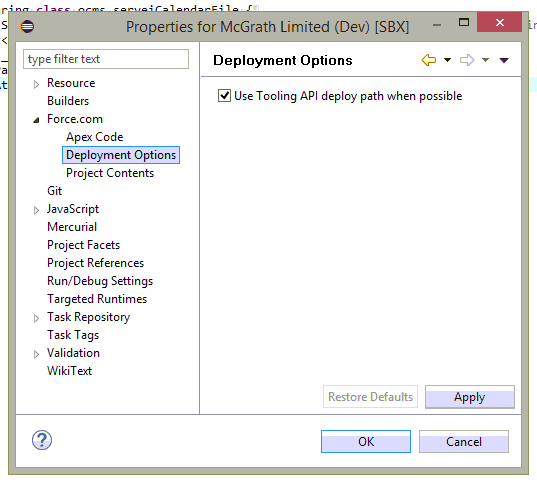 For me the best IDE for salesforce is https://www.aside.io/login

I loved this IDE. so fast and easy to use. no need to add all the workspace etc. Just login and start your work (y)

You can have a look at CodeFusion: http://www.elastify.eu/apps/CodeFusion It follows a different approach and comes as a free and 100% native app installed into an org as a managed package. Supporting both, ToolingAPI and MetadataAPI switchable, you can compare the performance. Typically ToolingAPI is much faster.

Unfortunately slow development is the reality of the cloud paradigm of SF, and it will remain so at least until there will be ability to spin up local SF servers.

But there is good news - at least for front-end - there is a process that can immensely speed up development.

It involves intercepting your CSS, JS, and to some extent generated HTML markup through an intermediate proxy to serve local files and hence avoiding the save to server cycle. We have been using this successfully in a company of 50+ employees as it also greatly helps with collisions on large project with many developers.

Please see a full blog post I made of this here: http://danielsokolowski.blogspot.ca/2015/11/speed-up-saleforce-development.html

I would suggest using Sublime Text + Mavensmate and playing with the Tooling API enable/disable setting :).

Not the answer you're looking for? Browse other questions tagged apex ide eclipse developer-productivity or ask your own question.

29
Development Team Best Practices, or “Is this IDE for real? I am in disbelief”
4
Speedup Testing with Force.com IDE using slim Logs - but how to set the log-level?