I´m trying to figure out how to achieve the following requirement: 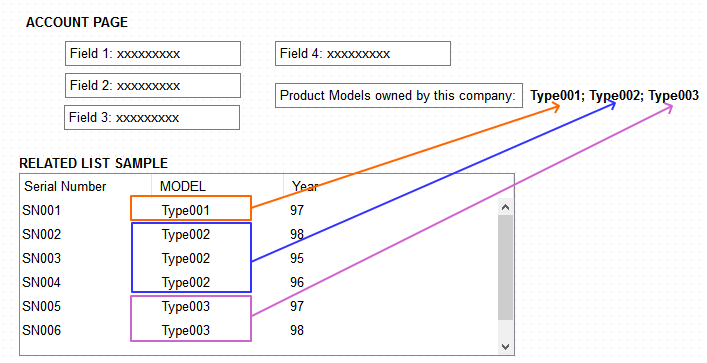 This would help us to segment our campaign and give us at a glance the type of products the company has acquired, like summarized data.

My first thought was that this could be accomplished with a report using a report type of Accounts with <relatedObject>. With the information that you've provided, I can't see how this wouldn't work (With such a report, you would be able to see the individual Accounts, and all product models available on each individual Account.)

That aside, assuming that a report is not a viable solution, my next thought would be to do this with a Trigger.

As I was writing this, crop1645 commented about the declarative rollup summaries package. I had completely forgotten about this, and it's probably the best solution (after building a report).

I'll keep going in case someone can't use the delcarative rollup summary package.

You could go about this in two ways, (spoiler: they end up being very similar) depending on the type of relationship between Account and your unnamed relatedObject. For ease, I'll assume your related object is called Product__c, and that it's relationship name is simply Products

If your two objects are in a Master-Detail Relationship

This is the easy case. Assuming Account is the Master object, you could use a Parent-Child subquery in an Account Trigger Before Update.

The Set<String> models is just there to make sure that you don't end up with duplicate models being listed on your Account.

The Master-Detail relationship ensures that Account's trigger(s) will be fired when a Product__c is inserted or updated.

If your Product__c object has a lookup relationship to Account

You can largely reuse the code that was used for the Master-Detail case. The difference being that you have to gather a list of Account Ids instead of being able to rely on a Trigger context variable, and you need to perform a DML update.

Not the answer you're looking for? Browse other questions tagged lookup related-list or ask your own question.